Comfort and Fashion - Never the twain shall meet 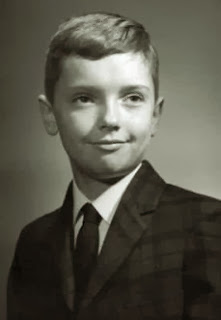 Those of you that know me, know that I don't struggle much with fashion. At least not now, when I am pretty well worn out."
Adva would claim that my poor dress habits even go beyond fashion.
"You're not wearing that!" she exclaims. "It is full of holes!"
"There are only two... three," I respond. "And I am just wearing it around the house and for working in the garden," I lie.

Usually I get away with wearing what I want, but sometimes I hit a snag.
"I hope you haven't been wearing that to work!" Adva says, surprising me on one of the rare occasions that she arrives home from work before me.
"Well... I had to move some computers and stuff."
She doesn't seem quite convinced. A few days later, the shirt mysteriously disappears.

I have been struggling with clothes since the early years. My mother would dress me up in a suit and tie for Sunday school and I would enter with what some people might call my penguin imitation: my arms curved up and out like a penguin as I waddle into the room. But it was no imitation. It was all me. I just couldn't stand certain things rubbing up against my skin. This struggle between comfort and fashion continued for a long time after that and may be one of the reasons why I ended up on an Israeli kibbutz. Israelis, in the early 70s, weren't concerned much with fashion - whether they lived on a kibbutz or not. Even in the 1980s and early 1990's, when I went to international computer business conferences in Israel, it was rare to see an Israeli in shirt and tie. Almost all of the suits were visitors from abroad. No wonder why I felt more comfortable here than in Canada. All this suited me fine.

But in the last decade, suits and ties have started popping up in many places where they hadn't been seen before on the Israeli scene. Fortunately for me, by the time this happened, I was already turning into a grumpy old man with little patience for anything, let alone primitive trivial social norms. Wearing a noose around my neck and dressing like everybody else to fit seamlessly into some social norm had no longer any meaning for me, if it ever had. You are what you wear, they say. And as I have already been deemed a social outcast - I guess it is time that I dress the part.

Some of you might think that I am an ideal candidate for a nudist colony. You can't get much freer than that when it comes to dress, they say. But there are two flaws to that assertion.
1. You are once again conforming to what you can and can't wear.
2. This conflicts with my incessant need for privacy - I just have to keep some things to myself.

The desert serves me well, in this regard. During the long Israeli summer - which lasts close to seven months - all that I basically need are two pairs of shorts, three short-sleeve shirts, a pair of sandals, and enough underwear to last me the week. Oh yes - and running shoes for the gym.

Adva, like most women, has a much more extensive wardrobe. Most women won't wear the same thing two days in a row. I am not sure how many days must pass before they can wear the same outfit again. Then there is the makeup, perfume, and the trick of showing just enough cleavage. While I make do with a short shower, a dab of deodorant, brushing my teeth and my hair (what's left of it) - Adva disappears for a thirty minute ritual and comes back all made up.
"It's important to dress up for work."Adva says, noticing that I am wearing the same outfit for the third day in a row. "Don't you want people to respect you?"
Which translates into: "What, don't you have anybody to flirt with at work?"

It's a matter of priority, I suppose. What really is important. Which, for some of us, cannot come without comfort.