The Windmills of My Mind

I feel that I am surrounded. Surrounded by silence where even my voice is not heard. 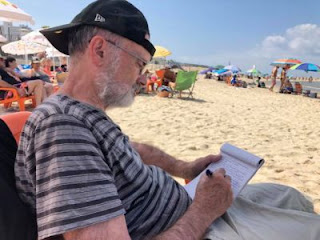 I have never excelled at verbal skills, whether this be the reason for my being an introvert or the result of being one. And the more my verbal skills deteriorated, so did my social skills, until they became almost totally non-existent.

But there has always been my writing. There can be found my love for words and the key to opening up the hidden secrets of my mind. My writing has enabled me to live in a world which is bearable and allow me to express myself, for better or for worse.

But things have changed. A few years back, I started my second book - When Winter Wind Wears Desert Boots - on a low flame but it soon became all-consuming. Something was wrong, terribly wrong. My body and mind both told me this, but not in unison. They had gone renegade on me and this lack of coordination between the two would become my greatest enemy.

I became a man with a mission. I was now writing a confession. Not a confession of things past, or things that still hadn't happened, but rather a confession of what it was to be human. And to finish it, I only had until the end of time.

It was with a sense of release, then, that I finished the book. It was out there now and no longer haunted me from the inside. I know that many who read it, especially those who know me, found it difficult to read. For they couldn't detach their knowledge of me from the main character in the book and it didn't make any difference to them that the events had never really happened. One close friend who read the first draft of the book told me to never have it published. "It will be your ruin," he said. Another reader - an English teacher - said that the whole book was just smut.

Do I regret the graphic portrayal of desire and search for intimacy? No, I don't. The book was not meant to make you feel comfortable.

For better and for worse, I am leaving this part of me behind. Call it a legacy, if you must.

It was not long after the book was published that I was diagnosed with Parkinson's. It was as if I had been working in the dark and somebody had suddenly turned on the light. The good news was that they knew what was wrong with me. The bad news was that it was only going to get worse with no chance of a cure. One of the many things that I was warned about was increasing speech abnormalities and I felt myself going full circle.

A year has passed since I wrote my last blog entry. I must do better. For if I lose my ability to write, then I have lost all. Right now I am working on my third book - a work of dystopian fiction which mirrors the type of world we live in today. And no, you will find it difficult to find a character who strongly resembles me. How close am I to finishing? Let's say that I am rounding third base and am on my way home.

It is a journey. You are welcome to travel it with me. Maybe at times, I will cause you to smile or even shed a tear. I will be happy to have you as a travelling companion.

And one day, in the distant future, a grandchild of mine may pick up my second book and try to attach the written voice to a vague memory of an ageing man with kind eyes but a stern expression.