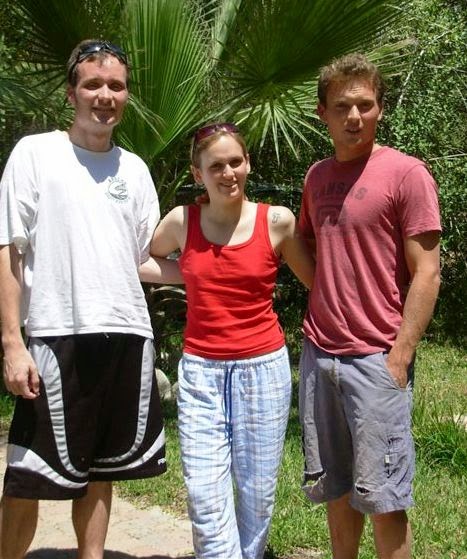 I think I have become somewhat of a curiosity to my children. Perhaps this is a part of losing relevance as we grow old. Or perhaps it is also linked to circumstance. A close childhood friend of mine - same age as me - started having children much later in life. His oldest child is in her mid-teens and he still plays a very relevant role in her life. But my children are all grown up and have flown the coop. When is it that we feel less responsible for our children and they begin to feel responsibility for us?

I suppose I shouldn't be surprised that my children view me somewhat as a curiosity. Most people do. It just took my children a while to catch up, perhaps. And I suppose I am to blame. I left them partly on the outside most of their lives, beginning first and foremost with the language.

"So, you didn't speak English with them at home."
"No."
"Why not?"
"Adva and I spoke Hebrew at home."
"But Adva knows English."
"Yes."
"And the English language is the greatest gift you could give them."
"I thought that giving them life was."
"That too."
I sighed into the darkness.
"Anyway," I said, in a meagre attempt to defend myself, "I was fighting an uphill battle. I was changing country, language and culture. It was very important for me to adapt."
"Most new immigrants go through the very same thing."
"Yes, but with a significant difference."
"Which is?"
"They are confident in their right to be here, and in others recognizing this right."
"And you aren't?"
"Not necessarily."
"Why not?"
I looked nervously around me to see if anyone was listening.
"I'm not Jewish," I whispered.
"Oh."
"Is that all you have to say?"
"Maybe I should go."
"You can't go, you are my muse."
"Yes, but wasn't there an escape clause about misinformation?"
"When did I ever feed you false information?"
"I don't know. I will have to have my lawyers look at this."
"Lawyers?"
"Okay, you've got me. One of the problems of living in Cyberspace."
"Are you going to help me with this or not?"
"Do I have a choice?"
"No."
"Okay, then I guess I am."
Silence. She always liked the dramatic effect of silence.
"So," she said, "you speak Hebrew at home, but with a Canadian accent. You are not Jewish, but your children are, because there mother is Jewish. They probably have no idea why you came to Israel in the first place and why you are still here... am I on track, so far?"
"Knock yourself out," I said.
"And you wonder why they consider you as a curiosity."
"You are missing the point."
"Am I?"

"Was it as simple as that?" I thought to myself. What about the whole thing of getting old? Or was I trying to blame everything on getting old?

There are very few constants in life, things that I can state with certainty. But one is my children. They are the greatest part of my life. I would not take anything back. And now we have our first grandchild. And that is a real bonus to having children. They say that when your children are young, and they still don't know better, you are a superhero to them. But later they begin to see the flaws, and in their teens they wonder how anyone can be that stupid. Yet, in their early twenties, they are amazed at how much you have learnt in the past few years. And while you still have a very good relationship with them, you can never get back the magic. For they go on to create their own magic, through their own marriage and children.

And just when you are about to write yourself away, there is a grandchild. And you rediscover the magic through his/her eyes, letting you into a world you have almost forgotten. And I know that some day my grandchild will view me as a curiosity. But that doesn't disturb me. In the meantime, I will enjoy every moment.