The Nothingness of Being 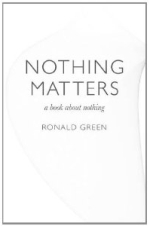 How much room is there in the human consciousness? For everything added, must something else be erased? How much love are we capable of giving? Can we have multiple relationships without one coming at the expense of another? Can we spread our love evenly between our children, without one receiving more, and the other less? When we learn things, must we forget others? Is consciousness the something and the sub-consciousness the nothingness? Whereas nothing appears to be absolute, nothingness is not. We appear able to slip in and out of nothingness. But what comes first - something or nothingness, the chicken or the egg? Can we only conceive of nothingness after we have conceived of something and recognized its absence?

As an example of slipping in and out of nothingness, I’ll take you back to an earlier blog entry - Why Guinness always tastes better in Tel Aviv. There I told you about how Ronald and I would reach great moments of enlightenment over pints of Guinness at Molly Blooms only to have these amazing revelations quickly evaporate into nothingness on our separate ways home. At the time, I thought they were gone for good, but I was mistaken. They resurfaced somehow in two separate books: Ronald’s Nothing Matters which delves deep into the concept of nothing, offering a clear, comprehensive and in-depth study of non-fiction; and my As I Died Laughing which sets out in a dysfunctional and fragmented exploration into the distinction between something and nothingness, supposedly a work of fiction.

It seems as if we are constantly moving back and forth into nothingness and the something which generated it. In leaving country, language and culture behind, my new Israeli identity has erased many parts of the Canadian identity which preceded it. The longer I have lived here in Israel, the further back into nothingness one would expect the exile of my Canadian self to be. But this hasn’t been the case. Recently I have found parts of my Canadian identity, which I thought were lost, fighting their way back into consciousness. I hear that this is not a phenomenon unique to my own personal expatriate existence. Apparently many people find themselves on a curve in their acclimatization to a new country and culture. They struggle to adapt to their new country, and just when they reach  the pinnacle of feeling almost native to the new language and culture, they enter into a period of recession - their former identity subtly reappearing out of their nothingness. And the main difference is that they no longer feel the need to apologize for, or try to stifle, this something that had apparently never gone away.

Which brings us to the concept of being. What does all this matter if we are going to die? And then everything becomes nothing - earth to earth, ashes to ashes, dust to dust - from nothing we came, and into nothing we return. But can we refer the concept of nothing to the concept of being? If nothing is absolute - the absence of everything - then how could anything be created out of it? If our being was nothing before our conception in birth, how could we have ever come about? And if nothing is the absence of everything, how can we enter into the state of nothing after we die. Something surely cannot become a part of nothing. This is probably unexpectedly comforting to many - linking our being to nothingness rather than nothing - believing that by slipping into nothingness, we can slip back into something again. All religions seem to have built their basic premise on this belief, although they all label it differently. For me, personally, I have no room in my vocabulary for an omnipotent being. I have enough of a problem trying to come to terms with my own being. Rather, at this point, it is simply a matter of logic; albeit human logic.

Understanding being, even without taking into account the state of being before our conception and after our death, has puzzled thinkers throughout the ages. A child cannot differentiate between itself and a separate world at first. It goes through a cognitive development where it suddenly becomes aware of objects separate from itself. And then later, it is also able to differentiate between these objects. Is this something that the child is taught, or acquires through experimentation in this new world? Or is it a part of our cognitive programming? And if so, why does it take time for this programming to be activated? Is our cognitive programming the nothingness through which all somethings are recognized? Does this help us understand which comes first - the chicken or the egg?

If something came from nothingness, then the process could hypothetically be reversed. Under special circumstances, we might find ourselves returning to a womb like state. Let us consider the example of Gilad Shalit, a young Israeli soldier who has been held in captivity for the last five years by the Hamas, and who will apparently be released in a few days. Gilad has had no real human contact in the last five years. He has been confined to a solitary cell where his only reality is the things inside these four walls that he can see, hear, touch and smell. Over time, the construct of this reality must have slowly filled his consciousness, pushing back everything he had known before then into nothingness. And in Gilad’s case, we must ask ourselves if there is a point of no return, where something is pushed so far back into nothingness that it is lost forever. For Gilad has come as close as possible to nothing - the absence of everything - as appears humanly possible. Upon his release, will he capable of recognizing a world he once new? Or will this once again become a learning experience? For Gilad, his being hasn’t changed. But for his family and closest friends, they will search for a being that they recognize,and they may have to come to the realization that he is now a stranger. Must we then divide being into two? Who we know ourselves to be and how others see us? After we die, if we do still exist in nothingness or in something, the recognition of our present being is in our eyes only. Others still recognize our being, even after our death, but they only recognize what they remember of us.

Life is frail. There is no doubt about that. And it is finite - no matter what we do. Yet we never give up on our search for meaning. Maybe we just have to learn that meaning can come out of nothingness, just as much as it can come out of something. Or maybe we need to take one step further and come to the realization that there isn’t any real difference between the two.
Posted by dglloyd at 1:06 AM