Do the clothes really make the Man? 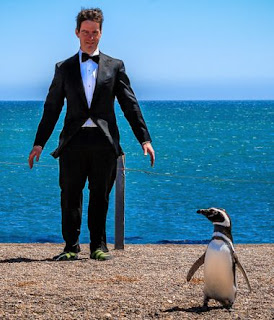 When I was a young brat, I abhorred going to church. This was not because of the empty teachings in Sunday School or the seemingly meaningless collection of different coloured stars for memorizing parts of the Bible. No, it was because of what I was supposed to wear. I dreaded the approach of Sunday, knowing that I would have to put on a suit and tie.

"Doesn't he look cute!" my mother would remark. "It's a shame that he spoils it with his penguin walk."

My penguin walk, as my mother called it, was walking with my arms rigid to the sides, trying to let the coarse garment of the suit touch my skin as little as possible. But my mother only saw this as an expression of rebellion, on my side. She didn't realize what a torture this was for me. God knows what psychological impairment in later years could be traced back to this Sunday ritual.

It was only in my adult years, when I was diagnosed with OCD (Obsessive-Compulsive Disorder), that we came to the realization that this had no connection to my being a spoiled brat, but rather was a neurological disorder which had only gotten worse over the years. It was then that I publicly announced to family in Canada and in Israel that I would no longer put appearance first. I was now a cranky old bugger who had certainly paid his dues to family and society over the years and was now putting himself first.

But of course, nothing is that simple. As the OCD got worse, I could not wear any shirt with a stiff collar (what I considered stiff). Which made shopping with me a real pleasure. First of all, to get me to go shopping for clothes was a challenge in itself. I still have shirts that I have been wearing the past forty years. For me, they are extremely comfortable, for they have been worn in, Adva insists that what I call comfortable, she calls sloppy, and I shouldn't be seen like that in public. I tell her that they are just for the comfort of the home. But then she catches me outside, wearing my old shirt from ulpan days, its colours extremely faded.

"You promised not to wear this in public," she says.
"I was just taking out the garbage," I reply, innocently.
The next day I find the shirt in the garbage. It is days like this when you have to count your losses and take it like a man.

"The clothes you wear to work is also a sign of respect,"Adva liked to say.
"Respect to whom?"
"To the people you work with."
"I have to crawl under desks to check connections and schlep computers. I'm not your typical office worker choosing his clothes to beautify himself."
"That's just an excuse," she says.
That is a real show stopper. She doesn't recognize my situation when it interferes with what she deems should be. And I thought I was the master of denial.

The thing is - Adva works in a high profile job and I am tucked away in a back office where most of my communication with fellow workers and colleagues from other parts of Israel and beyond is done mostly through virtual means. When I mention this to Adva, that most of the people that I work with don't even see me, she replies, "That doesn't matter. You see yourself."

That's another cryptic comment that I don't quite understand and thus cannot effectively respond to. Which is probably what it is meant to do - knock me completely off-balance.

So, what does all this have to do with the old adage: It is the clothes that make the Man. (Please note that this is the generic use of Man.)

Well, Adva - whether it is connected to her professional life or not - is continually looking more and more distinguished, while I am becoming more and more haggard. If I were to come to work, dressed the way that Adva would want me to dress, co-workers would probably ask me, "What, are you going to a wedding or a funeral?"

So, maybe I am beyond hope. Although, Adva would beg to differ. She views me as a modern-day Pygmalion. She would love to have the opportunity to dress me and make me into a real mensch.