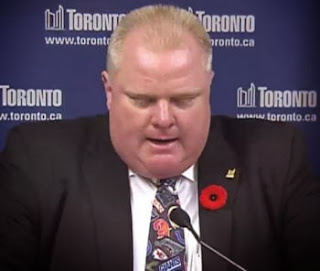 You've got to give the guy credit. Not since the marital and post-marital antics of Margaret Trudeau has a Canadian managed to star in leading news broadcasts, late night show monologues, and of course - have someone play a caricature of him on Saturday Night Live. But no caricature of him can do the man justice. If you want to really witness the depths of chaotic comic absurdity that the man is capable of -  simply watch Rob Ford, Mayor of Toronto, at a press conference.

I realized that Rob Ford had hit it big when an Israeli radio station led into the hourly news with a hot item about a crack smoking, inebriated Mayor, known for his racial slurs and demeaning remarks about women. And who was this mayor? Rob Ford, the Mayor of Toronto, a city in the United States of America!

Now, on a normal day, I would be on the phone bombarding the radio station for their gross error.
"Do you call yourselves news reporters? How can you put a major Canadian city in the United States, of all places? You do realize that Canada and the United States aren't the same country? Or were you out for lunch that day?!"
(Some of you out there, especially those of you married to Canadians, know how sensitive we Canadians can be.)

But no, I didn't say anything - not even to Adva who was in the car with me listening to the news. Some things you just don't want to take credit for.

"You know, there really is a Toronto in the States," Adva said, convinced that the news reporter had got it right, for everyone knows that Canadians aren't like that. "When we were in California (on a business trip) two people who were to join us couldn't land at LA airport because it was shut down because of the shooting there. They phoned us to tell us that they landed in Toronto, instead, and were renting a car and should be there later in the day. We thought - how are they going to get from Toronto to California by car in one day? But then we discovered there is a Toronto in California."

For Adva, believing that Rob Ford was the Mayor of a Toronto in the United States was the only way of having it make sense. I might have been tricked into this also had I not been following the Ford saga daily in the Canadian online media. And being Canadian, or at least still part Canadian, I had to own up and accept a part of the collective guilt.

"Yes, but in this case he really is the Mayor of Toronto. Toronto, Canada."
"Your Toronto!" Adva exclaimed, aghast.
"Yes."
"How did that happen?"
"Don't ask."

But that was before a long line of police investigations into the actions of  Israeli politicians. Not only have mayors of Israeli cities been investigated and prosecuted, but so also have Israeli government ministers, an Israeli Prime Minister, and an Israeli President (who is presently serving jail time). Many people even think that the police have become overzealous in their investigations. It would be difficult, then, to still maintain that there is no accountability for Israeli politicians (although unfortunately stupidity is not a criminal offense, punishable by law).

And then along came Rob Ford, who not only appears to have crossed almost every red line possible, but is still in office. Not only is he accused of smoking crack, being constantly inebriated, committing racial slurs and  being involved in conflicts of interest, but some of his vices have even been captured on camera - such as smoking crack and urinating in public. In spite of all this, other than stripping away some of his powers (a decision which might not hold up in court), the system states that he can't be rid of, no matter how many people want to see him go.

But there might be another option. Perhaps Rob Ford could be shipped out to the Toronto in California. If an Israeli reporter got this wrong when sober, think how long it might take Rob Ford to realize that he is in the wrong Toronto when totally inebriated. And who knows, California Torontonians might even really like him.

So, how did Rob Ford get elected in the first place? That appears to be the story behind the story. It involves a Toronto much different from the Toronto where I grew up. People no longer speak proudly of the Toronto melting pot, where people from over 50 different countries and nationalities come together to create a rich multi-colored ethnic culture. Instead, people talk more and more about the divisions, the discrepancies, and the large social and economic gap. It appears that Rob Ford has tapped into the frustration of those who not only feel that their needs are not being met, but that the gap between the haves and the have nots is constantly widening. Ford has managed to convince people that he has their interests at heart, in spite of the fact that he comes from a wealthy family. Some political analysts even believe that Ford will be reelected in the next election, despite everything we are witnessing right now.

"Where is the accountability, then?" you might ask.
I think we will have to wait and see.