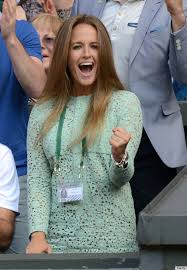 So, that's it. After a 77 year drought, Andy Murray - the bad boy from Scotland who once said, "I'll be supporting anyone but England." (referring to the 2006 World Cup) - has won Wimbledon for the Brits, and brought back that old English pride.

Much credit has been given to his girlfriend of many years - Kim Sears. She not only led him to leave behind his reckless boyish behavior and become a more mature representative of the United Kingdom, but she is also credited for the increasing maturity in his play - being viewed as the rock of his success in the tennis world. During the Wimbledon final, the camera didn't seem able to get enough of her, panning back and forth between her - in her Victoria Beckham designed dress - to the play on the court. Some may feel that she didn't warrant such exposure, but I admit that I found her stunning and I enjoyed every minute that the camera zoomed in on her. Her facial expressions, in watching Andy Murray struggle towards his place in history, were as much a part of the spectacle as anything else Actually, the last woman I found so stunning was Kate Middleton. Both women appear to have captured our imagination, bringing back the magic to a jaded empire: each regal in her own way. And there is already talk of Andy Murray being knighted. He, himself, has stated that he doesn't think this victory deserves such an honour, but millions of Britains appear to disagree.

But let's give Andy and Kim a bit of a breather, eh, and let them enjoy some deserved privacy in their six bedroom mansion. Back to the world of tennis, and a little bit more about women and tennis.

During my teenage years, I used to play tennis with one of my best friends - let's call  him Greg (in order to protect the seemingly innocent). This wasn't as simple as it sounds. Tennis was in no way popular then as it is now. Greg and I had to actually ride on our one speed bikes for miles (at the time we still used miles) to reach the nearest public tennis courts  (down by Birchmount and Kingston Road, for the Torontonians among you). I think we put more energy in getting there and back than in the tennis, itself. But we had a lot of fun. Those were the days of Rod Laver, Ken Rosewall, Margaret Court and Billie Jean King - with Bjorn Borg bringing in the new age. Like most kids,  we imagined ourselves to be Laver or Rosewall out there on the court, but we never kidded ourselves into believing that we could be anything nearly as good - much in the same way we knew we could never emulate a Rocket Richard, Jean Beliveau or Johnny Bower (hockey heroes, for those of you who are clueless).

Oh yes, I promised you something about women and tennis. Well, Greg and I didn't get into tennis because of women. I don't think girls were even on our mind when we started playing tennis.But later in our teenage years, Greg and I started going on double dates. Safety in numbers. You know what they say. Anyway, we discovered that our best double dates were when we went out with two girls to play tennis. Perhaps because we didn't have to talk much. (Greg and I had the habit of finishing each other's sentences, which drove the girls crazy). I mean, how much trouble can you get into playing tennis? Unlike taking two girls to see "Love Story". A bit of advice to you guys out there - never laugh at a movie when your date has taken out a tissue and is sobbing profusely into it. And beware of girls like M who believe that the perfect double date is going out with both of you at the same time. One of you is going to get dumped in the end. And it wasn't Greg.

But we couldn't depend on double dating and tennis to save us for too long. One day you are bound to find yourself standing there without a tennis racquet, and A is crying. That is another thing about doubles. One partner goes and the other leaves the game also. At least that was the case with R. Paul... I mean Greg (where is the backspace on this thing) never forgave me for that. I am not sure whether it was because he lost R as a date or as a very good tennis partner. (Which is harder to find, do you think?)

I didn't do too well with girls and tennis after that. Perhaps it was because I set my sights too high. I would never go out on a second date with a girl who didn't like tennis and Monty Python - a lethal combination. I remember watching Monty Python and the Holy Grail with X. She didn't even laugh once. And I didn't see any point in giving her a chance to prove herself on the court, after that. But I don't think she left that broken up.

Now, I don't know if Kim Sears even plays tennis. But I am less rigid now and would suffice with her watching me play with that special adoration in her eyes which until now has been reserved only for Andy. And I'm sure she loves Monty Python. You can tell just by looking into her eyes.