Someone pass me the remote 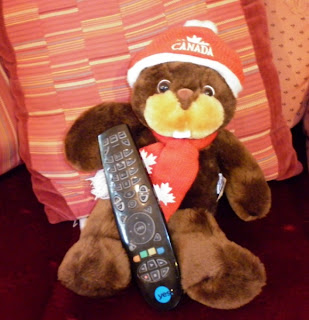 I grew up before the days of cable or satellite TV, in Scarborough - a small suburb of Toronto. Like everyone else, we picked up broadcasts by means of a roof top antenna, with a very limited choice of stations. There was no remote control at the time - just a knob that we turned to change stations. When there were only about six stations to choose from, that wasn't much of a problem. Which doesn't mean that this station  control wasn't mobile. When my parents went out and left my sister and me alone, the channel war began. At the time, my sister was obsessed with anything to do with horses and I wanted to watch pretty much anything else. After we were unable to negotiate agreement, the channel knob came off the TV and the race began. Which meant that instead of actually watching TV when my parents were away, we spent the time wresting control of the channel changer, which couldn't do much of anything until it was attached back to the TV.

So much has changed since. And as the technology continued to develop, I somehow appeared to always be one step behind.

It all started when I decided to leave Canada and see where my travels would take me. After working my way through Europe, I ended up on an Israeli kibbutz, and just as my friends back home were entering into the world of colour and cable TV, I entered into a world of black and white and one state-run TV station.

It's not as if I missed TV. At the time my whole life was still an adventure, and TV was of little interest to me. Of course, when the Yom Kippur War broke out about four months later, I did squeeze my way into the television room and watch as generals used maps to explain the present situation. Luckily I didn't know enough Hebrew at the time to understand that we were very close to being pushed into the sea. All I knew was that Israelis kept telling me: "Yihyeh  beseder." (Everything will be okay). It was only much later during my Israeli experience that I realized that Israelis only said this when things were really bad, or out of control.

We had to go to a communal television room, at the time, to watch TV because kibbutz members didn't have TV in their apartments. All to do with socialistic values which have long since disappeared.

Watching Israeli television at the time was like going back in a time machine to the fifties and sixties. And since the whole nation was watching the same programs, it was quite easy to find someone with whom to discuss a program from the previous day. And it was remarkable to see how the whole country appeared to shut down once a week to watch a new episode of  I Claudius. There was almost no traffic on the streets. You could hear a pin drop.

When it was finally decided to introduce TV sets into the apartments of kibbutz members, my future wife to be and I would go to her parents' apartment to watch TV with them (TV sets were handed out according to kibbutz seniority and we still had to wait). I found myself watching things that I would have never watched - had I a choice. And although there was a vibrant TV world developing out there, Israeli TV was basically a collection of grade B reruns. This was still before there was any real Israeli Hebrew sitcom content. What original Israeli content there was on Israeli TV was mainly made for TV documentaries and children programs. Israeli Educational TV was the shining light in the early Israeli television experience.

In the meantime, I missed a whole generation of North American TV. I never saw the Watergate broadcasts; I never saw Wayne Gretzky play in a regular season hockey game; I  never saw Seinfeld until the last episode was finished and all that was left were the reruns. But I rationalized: "If you are going to leave a culture behind, leave it behind. Don't expect it to follow you to wherever you end up." Just another reason for my friends back home to proclaim me crazy.

But TV is somewhat a measure of the ever-changing Israeli experience. Israel before and after colour television is not just a question of colour, but also a question of social fabric. Why, we must ask ourselves, did Israel wait for over ten years to implement Israeli TV broadcasts in colour when it already had the technology and equipment? Moreover, when Israelis began to import colour televisions in order to watch imported TV programs in colour, why did the government order the state-run TV station to use a special mechanism to erase all colour from the broadcast? Then Israeli Prime Minister, Golda Meir, described colour television as artificial and unnecessary. Political elements in the government went even further in claiming that the import of colour TV sets would only widen the gap between the Haves and the Have Nots. But Israelis, known for their ingenuity, began to purchase TV sets which had a built in anti-eraser mechanism which returned the colour that had been erased.

The kibbutz also struggled with the social impact of television on the kibbutz way of life. Bowing down to increasing pressure, it was finally decided to introduce black and white TV sets into kibbutz members' apartments. But by the time that that happened, Israel had started to broadcast in colour and the rest of Israel was moving over to colour sets. It took a while for the kibbutz to catch up to that, too, but by then we had decided to leave the kibbutz and were headed south, deep into the Negev desert.

That was when we really began to feel the technological gap. But what do you expect, living in the desert?

The first development was the creation of a second Israeli TV station - this time a commercial one. Soon, not only were friends back home in Canada telling me what I was missing, but friends back in the centre of Israel, as well.
"You have to watch Seinfeld!" they told me.
"It is only on Channel 2," I told them, "and the signal doesn't reach us."
The children were complaining and my wife kept pointing out what we were missing, but what could you do - it was out of our control.
"Yihyeh beseder," I said.

And then Channel 2 only made things worse, by increasing the signal, just enough to tease us, but not all the way there.
"What are you doing on the roof?" my wife called up to me one day, as I stood precariously above twiddling with the antenna.
"Trying to get Channel 2," I said.
"Are you crazy!", she exclaimed. "You will kill yourself."
"That program you told me about last night, that you really want to see, is on."
"I'll turn on the TV" she said. "I'll let you know when we get a picture."
"Do you see it now?" I called down to my wife, through the open window.
"I see something."
"And now?" I asked twisting the antenna just a bit more.
"Better!"
One more little twist.
"Good! That's it," my wife called out. "Don't move!"
After about ten minutes, I decided it was time for me to be rewarded for my efforts and let go of the antenna, starting to make my way down.
"We lost the signal!" my wife cried out.
It was then that I discovered that I am a good human conductor.

But if I am known to be one thing, it is obsessive. The signal was out there taunting me, and I wasn't going to give up soon. I found a long iron pole that had been discarded in a nearby junk yard and brought it home. Attaching it to the house, outside of the living room window, I attached the antenna at the top. I could then lean out the window and slowly turn the pole, turning the antenna, until I got the best picture. I even managed to pick up Jordan TV at times. But because of usually strong evening winds, I had to hold the pole so that the wind wouldn't cause the antenna and pole to turn. But at least now, hanging out of the window, I could keep a hold of the pole and watch TV at the same time.

It was then that cable television reached Israel. Israel was finally catching up to the rest of the world. Well... most of Israel. The cable company (a monopoly) informed us that it was too expensive to lay cables down in our remote desert neighborhood. And here we were again, way behind everyone else.

It's not that I had to have such access to the boob tube. It wasn't totally necessary, as Golda Meir would say. But I wanted the ability to choose, even if it were the choice not to watch.

And along came an Israeli satellite company and the cable company's monopoly was over. For the first time, anyone, anywhere, could be hooked up to hundreds of stations. Since we were one of the first communities to hook up to the new service, we were offered the opportunity to sign up to the unlimited package, something I jumped at, and something they soon no longer offered to new subscribers. And just like that, everything changed. It wasn't long before we got a digital recording box as well, and access to VOD (video on demand). Suddenly, all those years of drought were behind us. We had better access than many of my friends back home in Canada.

So, what is the punch line? Patience, perseverance? What comes around, goes around? I don't really know. Right now I can choose not to watch 90% of the stations available. And I like that - just fine.
Posted by dglloyd at 10:45 PM