Wake up and smell the flowers 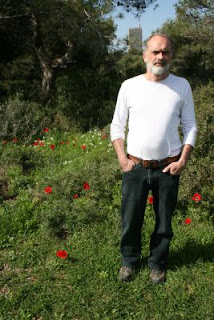 No, they aren’t roses. These be wild flowers. Wild, but protected by the Nature Authority. Israelis may be a grumpy, aggressive, loud lot - but they sure like their wild flowers. On a beautiful spring day (can the 9th of February be considered spring?), we wandered about admiring the flowers up on the Carmel Mountain on the outskirts of Haifa. It was a beautiful day, one of those magical, bright days which appear unexpectedly during the winter. All of Israel seemed to be outside on that day, migrating into the parks - enjoying barbecues, hiking, and of course: the flowers.

Which is fitting. We are into the second month of 2013. It’s time to wake up and smell the flowers.

I know that much of Canada, and North America as a whole, is deep under snow as I write these words. So it may seem a little unfair, the timing of this particular blog. But then, you get to put on skates, head out to the nearest rink, freeze your butts off and drink hot chocolate.
All we have is sunshine.

Israelis don’t get the Canadian cold. During the last winter storm, an Israeli interviewed in New York City complained about the "extreme cold".
“It's -1 (celcius) right now. During the day it sometimes goes up to a little above zero. But then it usually goes down to about -7 at night.”
Excuse me? 1 below and it even reaches a bit above zero? And you dare to call this cold? 7 below at night? Don’t talk to me about cold until it is at least -8 during the day.

Now, let's see how Canadians view the cold according to the “Canadian Temperature Scale”:
+21C (+70F) - Texans turn on the heat and unpack the thermal underwear. People in Canada go swimming in the Lakes.
+10C (+50F) - Californians shiver uncontrollably. People in Canada sunbathe.
-7C (+20F) - Floridians don coats, thermal underwear, gloves, and woolly hats. People in Canada throw on a flannel shirt.
-9C (+15F) - Philadelphia landlords finally turn up the heat. People in Canada have the last cookout before it gets cold.
-73C (-100F) - Santa Claus abandons the North Pole. Canadians get frustrated because they can't thaw the keg.

Now, I admit, there may be a bit of an exaggeration there. At least about Santa Claus lasting that long, and Philadelphia landlords actually turning up the heat. But you get the gist.

I remember one year when my wife (Israeli born and bred) and I were on a winter visit in Canada. My parents and I decided to take Adva out on snowshoes in order to enjoy a winter walk in the deep snow of Northern Ontario. I must admit that at that time it was beginning to get cold even by Canadian standards (-25 C). After about 10 to 20 steps, we noticed that Adva wasn't with us. Retracing our steps, we found her in the car, doors locked on the inside.
“I’m not going out there again!” she announced with Israeli finality.

Another year we went to Canada on a summer visit. No worry about the cold then. We went camping with my parents and on a cool rainy summer day, headed down to the beach to go swimming.
“Are you crazy?" Adva said. "Going swimming in the rain?”
“Why not?” I answered. “You're going to get wet in any case.”
Adva just didn’t get the cold-headed Canadian logic.

It doesn't appear, then, that Canadians will be smelling the flowers soon. Will they let these months slip by, waiting for spring to arrive? So much is lost in the waiting. We are reaching the middle of February. Isn't it time to wake up?
Posted by dglloyd at 5:25 AM