Just how English are you? 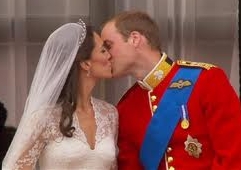 Don’t you love ambiguous sentences? One of my favourites is “The peasants are revolting.” Interpretation often depends on your point of view. Sometimes we even miss the ambiguity. We can roll these linguistic creations around on our tongue and dissect them, right down to their deep structure. I used to love creating and labeling each structural node, drawing out of it a new branch, or a series of branches. Life made sense then, in first year Linguistics, until we were told that we were studying something which had already been discarded, Chomsky opting out for something much more abstract.

So, what does “English” mean for you? For some, it is just a language. For others, it has also historical and geographical connotations.
Watching the preparations for The Royal Wedding, I was reminded of the early years - my early years, that is. Canadians were just beginning to believe that they deserved a unique identity and culture. No attempt had been made to teach Canadian history before then. We learnt English (British) history and world history. Most of the few TV channels that we could receive were from the American side of the border, and what Canadian channels we did receive showed little Canadian content. Our exposure to literature was the English classics. A successful Canadian artist was regarded as an oddity (“Do you know that Lorne Green and William Shatner are Canadians?”) And even then, they could only reach stardom when they went to the States to live. We didn’t have our own flag, or anthem, and had to stand for the playing of “God Save the Queen” at public events. Which caused endless embarrassment for my parents, as I would slump back into my seat, grab a hold of the arm rests, and refuse to get up. “David, stand up!” my mother would urge in a hushed voice, giving me a gentle nudge with her foot. “She’s not my queen!” I’d mutter in return, sitting proud for Canadians everywhere. I believed, then, that I was a part of an invisible band of Canadian rebels, about to overthrow the monarchy on Canadian soil with such brave acts of defiance. And when, a few years later, our high school introduced an experimental scholastic literature program of “contemporary literature”, including not only Hemmingway and Steinbeck, but also contemporary Canadian authors, I credited this directly to my efforts.
But it was only after I had left Canada that Canadian culture came into its own. Wayne Gretzky, Margaret Atwood, Leonard Cohen, Second City, the Royal Canadian Air Farce, This Hour has Sixty Minutes… Suddenly successful Canadian artists, both in Canada and abroad, weren’t such a rarity anymore. Actually, it was often the case that I left a better world behind me after leaving. My parents got their first colour TV and a new washer (and very first) dryer after I left the house. But this was not always the case. The kibbutz was privatized after I left – actually the whole kibbutz movement fell apart. And Toronto never did win the Stanley Cup again. But I already told you that (although it is worth repeating).
So, how does the emergence of a real Canadian culture affect the Canadian perception of The Royal Wedding? After the fairy tale wedding extravaganza of Charles and Diana, a marriage which turned into a disaster, can anyone look at the upcoming wedding without at least a touch of suspicion? And maybe we should even ask ourselves if  the English Monarchy still holds any relevance for Canadians, at all. It appears that the older generation, who watched Elizabeth change from a young, somewhat naive monarch into a stern, yet commanding Queen, feels that the monarchy has exerted a significant influence on Canada as a whole. But for those of us who know the Queen only as a somewhat humourless and dour personality, very similar to a high school English teacher I once had, we see no reason for the monarchy at all, at least not in Canada. And yes, we were among those who were amused by Trudeau’s famous pirouette.
A lot of it is about presentation. Maybe William and Kate can be cute enough as a couple to convince people, not only in Canada, but also in England, that there is a reason for the monarchy to continue: Kate with her fashionable, attractive look and William with his awkward boyish British charm, somewhat similar to Hugh Grant in any one of his many movies. But will any of this matter if Charles is still to become King after his mother’s death, unless she outlives him out of spite for what he put her through with Diana? Neither Charles nor Camilla are about to win anyone over, let alone a nation. Calls are already being heard to appoint William as next in the line of succession, instead of Charles. Follow up on the excitement of The Royal Wedding, they say, as well as the Oscar buzz around “The King’s Speech”.
Otherwise, the monarchy may finally be recognized for the dinosaur it is, and we may be left with only a democratically elected Parliament in England – a scary thought, indeed. Oh, but then we have the House of Lords. So all is not lost.
Posted by dglloyd at 9:04 AM